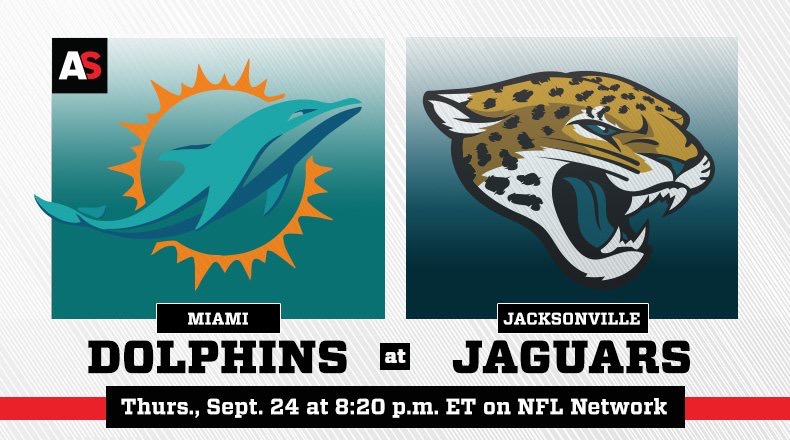 Tonight could be the least exciting Thursday night football game for the 2020 season. The 0-2 Miami Dolphins will travel across Florida to play the 1-2 Jacksonville Jaguars. Both are coming off losses in Week two, and are looking to bounce back. Although this might be a bad football game, there are still fantasy points to be scored.

One thing is for sure, neither of these teams' defenses will win them the game. With Miami’s ranked 23rd lowest, and the Jaguars ranked 24th, this game will come down to who’s offense plays better. I expect a high scoring game between these two teams, with both ending up with 30+ points on each side. Ultimately, I’m taking Jacksonville to win this game 34-31. Moments ago, it was reported that DJ Chark will be OUT tonight. Even with that information, I still think Minshew can produce without him. With what looks like their next workhorse running back in James Robinson, and their stout run defense that ranks 10th best in the NFL, I believe they will get their second win of the season.

Ryan Fitzpatrick, MIA- After a miserable three interception, 5.4 fantasy point effort in Week one, Fitzpatrick bounced back in Week two. He threw for 328 yards and two touchdowns, as he racked up 24.3 fantasy points. Tonight, Fitzpatrick could see that same stat line against a Jaguars team. This is the first game that he will not face a top tier pass defense, as he’s experienced that twice with New England and Buffalo in his first two games.

The Jaguars have given up the ninth most fantasy points to Quarterbacks in the first two weeks (21.8), so Fitzpatrick could be a decent play this week. The window to start Fitzpatrick could come to a close soon if he doesn't perform well on a week-to-week basis. There is a fully capable and hungry rookie in Tua Tagovailoa that is waiting for his chance. For tonight, I would definitely give him a look in Superflex leagues, and a low end starter in deeper leagues.

Gardner Minshew, JAX- I will start by saying that before the season started, I lost hope in this team. I think most Jaguars fans lost hope as well. Many were saying slogans like “Tank for Trevor” or “Fall for Fields”. To Minshew’s credit, he has silenced those people so far this season. He has led this team to a 1-1 record, and nearly came back against the Titans last week only to lose by three points. With two 20+ fantasy point games in two weeks, he is looking like a fantasy starter.

Minshew will now face a Dolphins defense that has been nothing short of disappointing this season. They’ve given up the third most fantasy points to Quarterbacks this season (30.1) and the seventh most pass yards per game (276.5). If Minshew is on the waivers right now, I would take him in a heartbeat. He will be without his star WR1 in DJ Chark, but I still think he’s talented enough to produce. He has a solid Running back, and reliable receivers in Shenault and Cole. He is a definite starter in Superflex leagues, and is worth a start in 12-14 man leagues if you don’t have a better option.

Myles Gaskin, Jordan Howard, Matt Breida, MIA- In the offseason, Miami went out and signed Jordan Howard and Matt Breida in hopes of replacing Kenyan Drake. Instead, the man being talked about the most is Myles Gaskin. Gaskin is 5’9” running back in his second year in the NFL. He has completely taken over this backfield. This has caused Howard to be a goal line only back, and Breida to completely disappear.

Gaskin has had a decent first two games, in which he’s put up 10+ fantasy points in both games. Not only is he heavily involved in the run games, he has been involved in the pass game as well. He’s caught ten passes on eleven total targets. On those catches, he ranks sixth in the NFL in YAC (3.94) amongst Running backs. These are encouraging numbers, especially if you look at the defenses he’s played. Tonight, Gaskin will go up against yet another tough run defense, as the Jaguars rank 10th best. If Gaskin can put up good numbers against defenses like the Patriots and Bills, there shouldn't be a doubt that he can do it against Jacksonville. Gaskin should be started as an RB2, or nice flex play. As for Howard and Breida, they should be on the waivers/bench.

James Robinson, Chris Thompson, JAX- When Fournette departed to Tampa Bay, the big question was who would fill his role? Would it be Chris Thompson? Ryquell Armstead? No, how about the undrafted rookie out of Illinois state? For all of my James Robinson owners, you struck gold with this guy. He has looked like the real deal, posting ten and twenty one point games in the first two weeks.

Robinson is coming off of a game with 102 rushing yards and one touchdown on sixteen attempts. I expect him to have a similar statline tonight, as Miami has allowed nearly 20 fantasy points per game to backs so far this season. Robinson’s workload in the rush game is solid enough for me to start him tonight in all leagues. Especially with the amount of injuries that occurred this past week to Running backs, you might have slim options. Don’t hesitate to start him at a flex spot this week. Thompson could have more involvement in the receiving game with the absence of Chark. If you're feeling risky, you can give him a chance. I would only advise this if you're in an 18-20 man league with little options on your bench.

Devante Parker, Preston Williams, MIA- Parker is still dealing with a lingering hamstring problem, but that didn’t stop him from having a 16.3 fantasy point performance against Tre’davious White last week. He is still the main target for Fitzpatrick, as he was targeted eight times last week and had a 17% target share. Preston Williams on the other hand has been a little quiet. He’s only recorded three catches on the season on twelve targets.

Parker was a full participant in practice on Wednesday, so he should be ready to go tonight. Preston Williams is also fully healthy. This duo has the potential to be very dangerous, but Williams needs to improve. Three catches in two games isn’t enough for me to start him tonight. I need to see more out of him before plugging him into my lineup, and tonight would be a good game to get things going. Parker should be started as a WR2.

DJ Chark, Keelan Cole, Laviska Shenault, JAX- A large portion of Minshew’s success has come from the production of these three players. All of them are in the top 35 for total fantasy points so far. Minutes ago, it was announced that DJ Chark has been ruled OUT tonight. This is a huge blow to Minshew’s value for this game. In the absence of Chark, someone needs to step up. I’m thinking that guy will be Keelan Cole.

Keelan Cole has been a surprise to many. He is WR17 on the year so far, and has scored one touchdown in every game he’s played this season. He also had the largest target share of any Jaguars player last week (15.6%). Laviska Shenault has also been a surprise. He’s had double digit fantasy points in the last two weeks. He also owns 74 snaps in the Jaguars offense, which is 49% of the total. In the absence of DJ Chark, Keelan Cole’s value skyrockets and he should be considered as a flex play or mid-low WR2. Shenault could be considered as a flex play as well in deeper leagues.

Mike Gesicki, MIA- One of the most hyped underrated Tight ends coming into 2020 finally had a breakout game, and it was very encouraging to see. Gesicki completely dominated the Bills defense as he caught eight passes for 130 yards and one touchdown. He also had a 23.4% target share, which ranked most on the team in Week two.

Jacksonville is horrible against Tight ends as well, they allow the third most fantasy points per game to opposing players (15.9). Gesicki will produce well tonight due to the amount of times Fitzpatrick looks for him on the field. I expect a very big game out of him tonight. So if you own him, start him.

Tyler Eifert, JAX- Eifert performed well last week, as he totaled 36 receiving yards and one touchdown. However, I don’t see this being a regular occurrence. Eifert is the guy who will have a double digit fantasy game, and then score in the single digits for the next five weeks. He did have a good game against Miami last season in which he had 17 fantasy points, but I don’t think he’ll repeat that tonight. However, Eifert’s target share was a positive last week. He owned 13.3% of the shares. Without Chark, he could be in line for a more productive game. If you're even thinking about starting him, I would advise you with caution. He could be a boom or bust tonight.

Dolphins D/ST, Jaguars D/ST- Both of these defenses are ranked in the bottom ten in the NFL. Considering this will also be a high scoring game, that’s another reason to not start them. They should be on the waivers in all leagues.

Jason Sanders, MIA, Brandon Wright, JAX- The reason you aren’t seeing Josh Lambo’s name on the Jaguars is because Coach Doug Marone announced he is being placed on IR. They have signed Brandon Wright as his short term replacement. This may be a high scoring game, but there are much better players on the waiver that can be streamed instead.

Good luck to everyone this week!