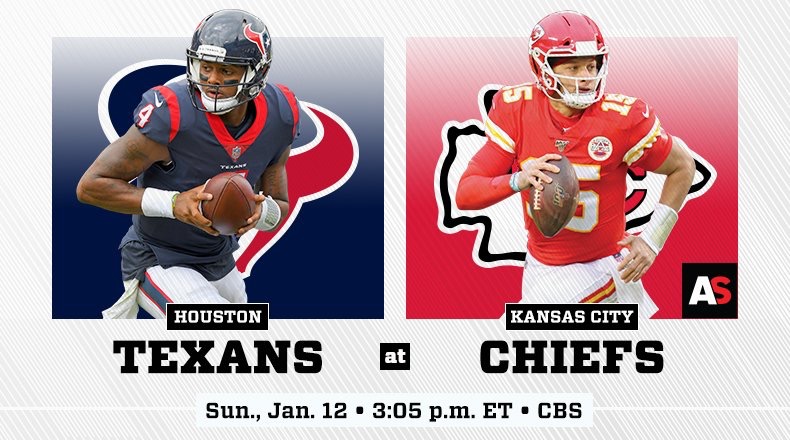 It has been 219 days since a professional football game has been played. Ladies and gentlemen, the wait ends today. The Houston Texans will travel to Arrowhead Stadium to face off against the reigning Superbowl Champions, the Kansas City Chiefs. The last time these two teams met were in the 2019 AFC Divisional Round, in which the Chiefs won by 51-31.

When these two teams face off, there are A LOT of fantasy points to be had. In their last two matchups, the Chiefs and Texans have combined for 137 total fantasy points. With two elite Quarterbacks at the helm for their offense in Mahomes and Watson, expect a high scoring game tonight that should result in a shootout.

Patrick Mahomes, KC- Mahomes is coming off somewhat of a down year to his standards after his incredible 2018 campaign. Despite missing two games last season, he still finished the year as the QB7 with 4,031 pass yards and 26 touchdowns. In Mahomes’ past two matchups with the Texans, he’s accumulated 594 yards in the air and eight touchdowns. That adds up to 61 fantasy points combined in two games.

With Mahomes being 100% healthy, an upgrade at RB in Clyde Edwards-Helaire, all of his receiving weapons back, and his success with Houston in the past, I would not want to face him this week. He should be started across all platforms.

Deshaun Watson, HOU- Watson will go into this game and the rest of the season without his star WR, DeAndre Hopkins. Hopkins was traded in the offseason to the Arizona Cardinals in exchange for David Johnson and draft picks. Many looked at the trade as “one of the worst of all time.” The departure of Hopkins brings down Watson’s fantasy value by a good amount. He has dropped in ADP in fantasy drafts by 10-15 spots, as well as PPR rankings by two-three spots. The great part about Deshaun Watson is he is a dual threat QB, meaning he can generate points through the air and the ground. He averages over five FPPG alone with his legs, and the loss of Hopkins will not affect that.

As far as Watson’s matchup with the Chiefs goes, I won’t be sitting him this week. Apart from him being ridiculously talented, Watson has succeeded greatly in his last two matchups with the Chiefs. In Week Six last season, he put up 280 pass yards and one TD. He also added two TD’s on the ground, resulting in a 29.4 fantasy point performance and a win. Watson performed well in their playoff matchup as well despite the loss, throwing for 388 yards, two pass TD’s and one rushing TD. Watson will still be efficient with more than enough weapons to throw too including Will Fuller, Kenny Stills, Randall Cobb, and Brandin Cooks. He is still an elite-QB1.

Clyde Edwards-Helaire, KC- CEH has been the most hyped fantasy rookie this offseason BY FAR. When the football world heard Damien Williams was holding out of the 2020 season due to COVID-19, the LSU product’s ADP skyrocketed. He jumped into the Top-Ten picks across all fantasy drafts, and for a good reason. Edwards-Helaire was a key piece of Joe Brady’s offense last year at LSU, as he rushed for 1414 rushing yards and sixteen rushing touchdowns.

The offseason has been brutal for rookies. With no pre-season games, and limited padded practices, one could say that starting a rookie in fantasy could be a boom-or-bust situation. I feel like that situation is different for Edwards-Helaire. Think about it, there isn’t a rookie in this draft class that is walking into a better situation than he is. He has the best QB in the NFL in command of the offense, a fantastic O-line, and will have a starter type workload. For these reasons, I will be starting CEH this week. He can be valued as a decent RB1 this week in all lineups.

David Johnson, HOU- Johnson will enter the 2020 season with a lot to prove, and that will start today. Last season with the Cardinals, Johnson had a rather disappointing campaign. He rushed for under 350 yards, scored two rushing TD’s, and four receiving TD’s.

Johnson enters tonight with a rather easy matchup. More likely than not, the Texans will be trailing most of the game. This will force Deshaun Watson to throw more, thus resulting in more receptions for him. The Chiefs ranked dead last in points allowed to running backs through the air last season. Not only that, but they gave up the second most fantasy points to opposing backfields in 2019 as well. All signs are pointing to Johnson having a solid night. I am confident in starting him as an RB2 with upside.

Tyreek Hill, KC- Hills stats took a considerable dip last season compared to 2018, as he had 600 less receiving yards and five less touchdowns. Those numbers don’t stick out, but considering he missed four games those are quality numbers. Hill should be on everyone’s starting roster tonight, just look at what he did to the Texans in the regular season. In Week Six, Hill put up 25 fantasy points as he had 80 receiving yards and two TD’s.

Hill has a lot of things going for him in tonight's game. Hill had 10+ targets in Week Six against Houston last season, and that number should be around the same today. Houston also struggled tremendously against wide receivers last season. They gave up the eleventh most yards (166.5), and eight most touchdowns (18) to opposing wide receivers last season. I know there were reports of a hamstring injury that occured in late August, but he should be fine. Two weeks since his injury, he has taken part in every practice. He is healthy and ready to roll. Tyreek Hill owners could be looking at a 20+ point game out of him tonight.

Brandin Cooks, HOU- Cooks has been one of the most consistent fantasy players in the last couple of years. He was the first player to achieve three 1,000 yard seasons with three different teams. This proves that Cooks can adapt quickly to any system and make an impact wherever he goes. All Cooks owners are hoping that happens this year, provided injuries don’t plague his season like it did in 2019. Cooks had a mere 583 receiving yards in 14 games with the Rams last season before getting traded to the Texans in the offseason. That was the second least amount of receiving yards he has ever recorded in the NFL, only his rookie season had less with 550.

Cooks does not appeal to me tonight for a few reasons, one being an injury. Cooks has officially been listed as Questionable for tonight. For the past week, he’s had problems with his Quad. He was held out of practice on Tuesday, and turned in a limited practice on Thursday. With Cooks status up in the air, and the Chiefs being considerably tough on Wide Receivers last year, I look at Cooks as a risky flex play tonight. If you are considering starting him, I would advise you to check his status a few minutes before the game starts.

Sammy Watkins, KC- Watkins had a monster game last year in Week One against the Jaguars. When Hill went down early, he exploded nearly 200 receiving yards and three TD’s. In the 13 games after that, Watkins didn’t top 64 yards one time and didn’t score a single touchdown till the playoffs. He is the definition of an inconsistent fantasy player. Watkins could have a big game tonight, but he also couldn’t. He is still the third receiving option behind Kelce and Hill. Due to his inability to produce week in and week out, he should be staying on the bench on your team.

Will Fuller, HOU- Fuller is the guy I am most excited to watch tonight. Injuries have put a massive hold on his career in the NFL, as he has missed fourteen games in the last two years. When healthy, Fuller has proven to be a nice flex play. In seven games last year, Fuller put up eight or more fantasy points. This included one monster 53.7 fantasy point effort in Week Five vs Atlanta.

Fuller is coming into this game and the season as Deshaun Watson’s WR1, which is very nice to hear for any Fuller owners. Although the Chiefs allowed the third least amount of points to wide receivers last season, I don’t see that affecting Fuller tonight. With the likelihood of the Texans playing behind most of the game, expect a lot of throws to come his way. If Cooks does not play tonight, he could be in line for a huge game, so I would feel confident starting him in a flex spot.

Mecole Hardman, KC- Like Watkins, Hardman is not someone I feel confident on starting every week. Last season, Hardman had a good rookie year. He recorded 538 receiving yards and six touchdowns. In fantasy however, he was extremely reliant on big plays. In 12/16 games, Hardman had two or less receptions in every game. Also, five out of his six touchdowns were scored in games with two or less receptions. Hardman has the ability to breakout, but I’m not gambling a starting roster spot on a guy who is the fourth scoring option on his team. Hardman should be sat tonight.

Randall Cobb, HOU- Cobb was once a fantasy star at Green Bay, but those days have passed him. He is expected to have some type of role in the slot tonight, and will enter as the WR3 on the Texans. If Cooks is held out tonight, expect Cobb’s role to expand as well as Kenny Stills. If Cooks plays, Cobb should not be starting. If he is held out, Cobb could be worth a low end flex play in deeper leagues (16-20 teams).

Travis Kelce, KC- Kelce was undoubtedly the best tight end option last year, and will likely repeat that this season. He was one of the most dominant fantasy players in 2019, as he had double digit fantasy points in every game except one, against the Houston Texans. Kelce made up for his 9.8 fantasy point performance in the AFC Divisional Round, as he manhandled the Texans secondary for 134 yards and three touchdowns.

Kelce is still Mahomes go to guy as well. He posted 136 targets last season, which was 40 more than second place (Sammy Watkins). Kelce owners experienced a little bit of a scare this week, as news of a knee injury arose in camp. He should be fine, as he was a full participant in Tuesdays and Wednesdays practices. Kelce should be 100% tonight, and ready to cause havoc. There should be no questions on whether to start him or not, you know the answer.

While all of this seems encouraging, Fells will be trapped in a 2-3 man rotation at Tight End for the majority of the season. With Jordan Atkins, Jordan Thomas and Kahale Warring, I don’t expect Fells to produce on a weekly basis. You are better off pursuing guys like Christ Herndon and Jonnu Smith. Both of these guys are rostered in less than 50% of leagues.

Chiefs D/ST, Texans D/ST- I am not confident in starting either of these defenses tonight. In their last two matchups, the score has been 31-24 and 51-31. It is very likely that this game ends up in a shootout, which will result in a lot of touchdowns. The Chiefs also scored zero fantasy points in their Week Six matchup against the Texans, while Houston only scored five. I would look to start a different defense this week.

Harrison Butker, KC, Ka’imi Fairbairn, HOU- Seven field goals and 17 extra points were attempted in their last two matchups. Butker should be on your starting lineup without question, and that will be the case for every week. Fairbairn is worth a shot tonight in the event of a high scoring game. Starting him is strictly up to you.

Good luck to all of you this week!