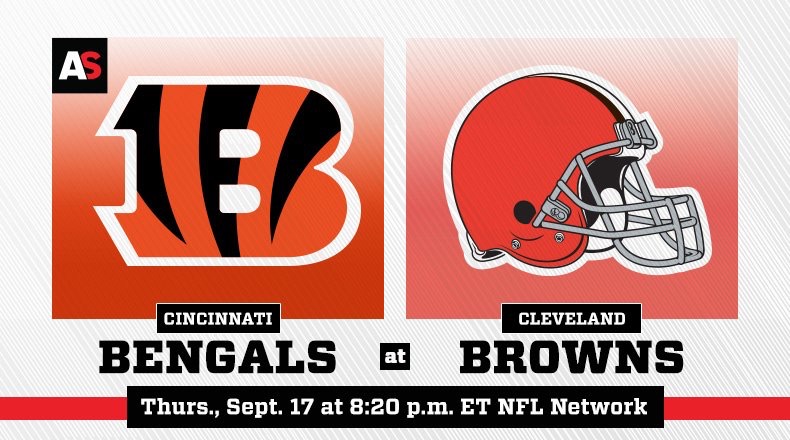 Tonight, the Cincinnati Bengals will travel to FirstEnergy Stadium to face off against the Cleveland Browns. Both teams will be looking for their first win of the season in this divisional rivalry game.

It’s no surprise the Browns lost Week One. They played a serious Super Bowl contender in the Ravens, and they haven’t won a season opener since 2004. The Bengals lost to the Chargers by a mere three points, as kicker Randy Bullock missed the game tying FG with five seconds left. Last season, these two teams split against each other, each winning on their home turf. Look for both teams to come out guns blazing in the Battle of Ohio.

Baker Mayfield, CLE- I wish I could say I’m surprised with Baker’s debut. Mayfield put up 189 passing yards, one touchdown, and one interception in a 32 point loss to the Ravens. The caliber of his opponent certainly had an effect on his performance, but those numbers should be better for a Heisman winner in his third year in the NFL.

Mayfield’s performances against the Bengals last season aren’t encouraging either. He logged five interceptions, and only 471 passing yards combined in two meetings in 2019. He’s also last in the league after Week one in yards per attempt, with only 4.1. The Bengals defended the Chargers well last week, so I don’t expect Mayfield to walk through this defense with ease. He has the tools to perform well with two elite backs, a solid receiving core, and a reliable option at Tight end. It’s now about Baker’s ability to perform. I would keep him on your bench this week. I need to see a good performance out of him before feeling confident in starting him. He’s a mid-tier QB2.

Joe Burrow, CIN- Burrow made his case for why he was the number one overall pick in this year’s draft. He completed 23 of 36 passes for 193 yards, and took a QB draw for 23 yards to the house. He scored their only touchdown. Burrow did everything inside of his control to win the game, unfortunately he couldn’t break the curse of number one draft picks losing in their career debut (0-12-1).

Burrow won’t face a lot of pass rushes like he did with the Chargers last week, so Cleveland should be somewhat of a break for him. He managed to pull together 17.3 fantasy points, and that gives me enough confidence to start him this week. He’s also a solid option in Superflex leagues.

Kareem Hunt, Nick Chubb, CLE- The Cleveland backfield is one of the most frustrating things to deal with right now if you're a Nick Chubb owner. For starters, Hunt just signed a two-year $13 million contract with the Browns. For dynasty players that have a share of Chubb, I feel your pain. In Week one against Baltimore, Chubb had less snaps and touches than Hunt. Hunt also got 49% of the running back snaps, while Chubb got 48%.

That stat is more concerning for Chubb owners rather than Hunt owners. Although it’s only one percent, Hunt shouldn’t be out snapping a guy that you paid late first round draft capital for. At this point in time, it’s almost a coin-toss between the two as to who has the better game. I could be overreacting as it’s only Week one, but you should still be aware. Chubb is too talented to be sat, as is Hunt. Start Chubb as a high-end RB2, and Hunt can be used as a low-end RB2 or flex play.

Joe Mixon, CIN- Joe Mixon owners, do not panic. It’s only Week One. There are many things to take away from last week's game, and mostly all of them are positive. Mixon had 19 out of the 20 carries, which is a good workload for an RB1 in fantasy. He had to run against a tough defensive line in the Chargers, so in some ways his performance could be considered a fluke. Mixon also secured 60% of the running back snaps, while Bernard only had 29%.

I think the biggest encouraging stat to start Mixon this week is looking at his performances against the Browns last season. He posted a 26 fantasy point performance in Week 14, and a 30 point performance in Week 17. Both times he rushed for over 140 yards, and scored at least one rushing touchdown in each game. He likely won’t replicate that today, but I feel very confident in Mixon’s abilities to bounce back. Even though it doesn’t look like his role in the passing game can improve, his ability alone is enough for me to start him as an RB1 this week.

Odell Beckham Jr, Jarvis Landry, CLE- If there’s one receiver I’m thinking of touching this week in the Cleveland offense, it’s Jarvis Landry. As for Beckham, his Week one performance wasn’t encouraging. With only three catches for 22 yards, you could say Marlon Humphrey did a great job in eliminating him as a threat. Landry on the other hand had a solid game, as he had 61 receiving yards which was a team-high.

I still think it’s too early to panic on Beckham. However if he doesn’t cash in this week against a weak Bengals secondary, you can start getting nervous. It was reported by Tom Pelissero that Landry was held out of practice Tuesday, and had a limited practice yesterday because of a hip issue. He should be fine, but will carry a questionable tag into today’s game. Beckham can be started as a low-end WR1with upside, and Landry can serve as a solid WR2 or phenomenal flex play.

AJ Green, Tyler Boyd, CIN- I was impressed with both of these players on Sunday, particularly AJ Green. Green’s snap count ranked third amongst Bengals wideouts, that could have been a result of the injury in training camp. Green still caught five passes on nine targets, which was a team high. His 10.1 fantasy points could have looked more like 18 points if his three yard touchdown catch didn’t get called back too. It was evident that the chemistry was present with Burrow, and he could be in line for a big game today. He’s the clear WR1 on this team.

Boyd also played well, although it didn’t show up that way on paper. He only caught four passes for 33 yards, and didn’t catch his first pass until the third quarter. Boyd is still a solid player, as he’s coming off back to back 1,000 yard seasons. I expect Boyd and Green to both have double digit fantasy point performances today, as Marquise Brown and the Ravens torched the Browns secondary last week. Feel good starting both of them as high end WR2’s or flex plays.

David Njoku, Austin Hooper, CLE- With David Njoku in IR after spraining his MCL on Sunday, Hooper will be in line for a big game. Njoku looked like his 2018 self against the Ravens, as he caught three passes for 50 yards and a touchdown. Hooper had a mere two catches for 15 yards on two targets. Those numbers are bound to go up this week in the absence of Njoku. The Bengals also gave up 73 yards to Hunter Henry last week, so feel confident in starting Hooper tonight.

CJ Uzomah, CIN- Who would’ve guessed that CJ Uzomah, a guy that eclipsed 45 receiving yards twice last year, would have the second most receiving yards on the Bengals after Week one? Not me. If you look at how much Burrow relied on his Tight end in college, Thaddeus Moss, then it makes sense. Even though he had a promising 8.5 fantasy points, one good game isn’t enough for me to start him. He had 12 single digit fantasy games last season. I would wait and see if he can replicate that performance for the next couple weeks. For now, he should be on the waivers in most leagues.

Bengals D/ST, Browns D/ST- Both of these teams didn’t have spectacular performances on defense in Week one. Although they both played high-octane offenses in the Ravens and Chargers, neither of these teams should be starting. Both the Bengals and Browns had two fantasy points combined last week. They should be on the waivers.

Cody Parkey, CLE, Randy Bullock, CIN- Both of these players should not be started. There are much better streaming options than these two. Both of them have proven to be inconsistent, and Bullock showed that on Sunday. These two should be at the bottom of the waiver wire.

Good luck to all of you this week!