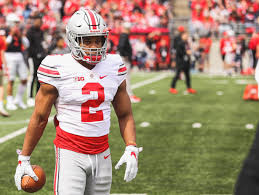 Ball Security: Unlike Jonathan Taylor, you don’t have to worry about giving J.K. the ball 200 times and him fumbling it away 10 times. J.K. takes care of the ball like a frat boy that’ll be hazed if he loses it. Maybe this is because it could secure him millions of dollars...

Vision: This is J.K. 's best trait. He seems to see everything. He’s also a smaller back at just 5’9” so he can hide behind his big offensive line while he finds the holes they have created.

Tony Alford: One of the best running backs in CSU football history, Tony Alford knew how to run the football. I’d say he is even better at teaching kids how to carry the football. Since being hired to start the 2015 season, he has produced Ezekiel Elliot, Mike Weber, and now J.K. Dobbins. Not too bad of a track record there.

College Production: Unless you live under a college football rock you know who J.K. Dobbins is. You also have heard all about his 2,000 yard Junior season. What you may not have heard about was how good his Freshman season was. He put up 1403 yards on 194 carries, amounting to 7.2 yards per rush as a 19 year old in the Big Ten. He’s also brought in at least 22 receptions in all 3 years. He’s the type of back that based on production is a no brainer 3 down back

Pass Blocking: To put it nicely, Dobbins pass blocking is below average. To put it honestly, he can’t do it to save his life. As a smaller back who didn’t participate in much of the combine drills he has done absolutely nothing to help his stock since the end of the season.

Ability To Play 3 Downs: This is on account of his pass blocking. Usually in the NFL when you can’t block on pass plays, you don’t play on pass plays. This hurts him immensely.

I think that his talent as a runner will outweigh his deficiency in pass blocking and this will keep him in the first half of the draft. He didn’t do much at the combine so we were unable to see his top end speed and athleticism but the tape shows good ratings in both. I’d assume he gets taken either mid-first round or 2nd round barring a Laremy Tunsil type situation.

If he is able to become a 3 down back in the league he easily has the talent, running wise, to become a top 10 back in the league. Fantasy wise next year a good number 2 to 3 running back could be a spot. He can receive the football with the best of the college running backs this year. This guy has the chance to be a real sleeper pick depending on where in your draft you are getting him.

Teams That Should Take A Look

Dobbins on the Buccaneers would be so much fun to watch, as well as have on a fantasy team. Jameis with the ability to see and a trusty running back at his side . As much as I like Ronald Jones lll, I don’t think he is the running back I’d want leading my rushing game. Another interesting place would be Los Angeles. I’d like to see what they do at quarterback to fully know, but J.K. next to a tailor-made 3rd down back like Austin Ekeler would be so much fun to watch. 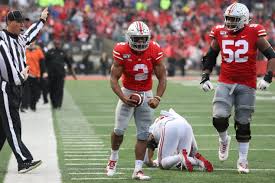